Sunken Garden at the Barbican 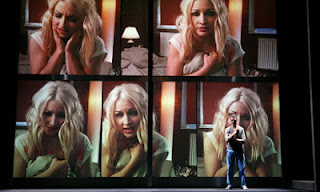 On the evening of Saturday 13th April 2013 I attended the English National Opera's performance of Sunken Garden at the Barbican in the City of London. This film-opera with libretto by bestselling author David Mitchell and score by Dutch composer Michel van der Aa combined music, text and visual images including one of opera's first uses of 3D film.

This occult mystery opera's world premiere featured Roderick Williams, Katherine Manley, Claron McFadden, Jonathan McGovern and Kate Miller-Heidke. The ENO Orchestra were conducted by Andre de Ridder. The characters Toby Kramer, Zenna Briggs and Iris Marinus appeared on stage while Simon Vines and Amber Jacquemain were on film. Put on the 3D glasses when entering the door under the flyover.

This film-opera follows a missing person and those who are searching for him. A parachutist falls to earth. Toby Kramer, a wannabe video-artist, is visited by one Zenna Briggs in his basement flat and wishes to see Toby's work in progress. This multi-layered production explores hoax and dark truth, while we ponder the connection of the disappearance of a software engineer with a neurotic film-maker and a gullible patroness of the arts.

The Sunken Garden is an occult engine built by Zenna in the dusk between life and death. The garden converts the visitors' souls and memories into immortality for its creator. In time nothing is left of the visitors but undying moths. Iris Marinus manages to use her dying voltage to stun her enemy, Zenna. At the last possible moment Toby exits the garden via the vertical pond but with one serious catch, he is now a man trapped inside Zenna's body.

Sunken Garden is an opera full of interesting ideas and innovations. This is a production for the 21st Century which uses a combination of live theatre with visual technology making this a truly contemporary piece. From my seat in the Barbican Theatre I was taken into many different dimensions and I really enjoyed how the live cast interacted with the filmed performances.

Simon Vines is dressed in parachuting gear, and Sadaqat and Mrs Wales wave him onto a light aircraft. Up it climbs. Out he jumps. Look at it, this... massive, unfair, beautiful, cruel, miraculous... World-Machine. Look at it. And you think, I'm part of this, too. This production asks questions about the future direction of opera. I found it very stimulating and enjoyable.
Posted by Andy Yourglivch at 01:33