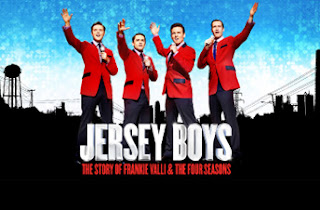 On Saturday 13th April 2013 I made another trip to London. During the afternoon I attended the matinee performance of Jersey Boys at Prince Edward Theatre in the West End. This internationally acclaimed hit musical, tells the remarkable rise to stardom of one of the most successful bands in pop history.

It tells how four New Jersey boys from the wrong side of the tracks invented their own unique sound, were inducted into the Rock and Roll Hall of Fame and sold 100 million records worldwide. With spectacular performances of all their hits, Jersey Boys is the electrifying true life story of Frankie Valli and the Four Seasons; the mob, the heartaches, the triumphs and the music.

It was an afternoon that delivered all of the Four Seasons hits including Beggin', Can't Take My Eyes Off You, Oh What A Night, Walk Like A Man, Bye Bye Baby (Baby Goodbye), Sherry and Big Girls Don't Cry. This musical takes the music of the group and combines it with their story. This makes for a gritty and interesting show and on top of that you get all of the songs. Oh what a night. Late December back in '63. What a very special time for me. As I remember, what a night.
Posted by Andy Yourglivch at 11:39