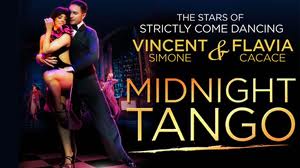 On the evening of Thursday 21st March 2013 I attended the Midnight Tango performance from BBC Strictly Come Dancing's Vincent Simone and Flavia Cacace at Norwich Theatre Royal. The night was set in a late night bar in downtown Buenos Aires and featured some of the finest Tango dancers in the world.

Midnight Tango took us on a journey into the heart of this intoxicating city. This was a combination of danger and excitement, joy and jealousy and pain and passion. Vincent and Flavia filled the Norwich Theatre Royal stage with explosive tango routines, gravity-defying moves and feather-light footwork. In 2012, Vincent reached the finals of Strictly Come Dancing, performing with Dani Harmer, whilst Flavia and Louis Smith won the series and took home the much-prized glitter ball.

Vincent and Flavia were fantastic as were the Bar Owner and his wife who added some wonderful humour and singing to the night. This was a spectacular and fun night at Norwich Theatre Royal which was full of Latin flavour. Great dancing and Tango music made for the perfect combination as Vincent and Flavia brought the magic of Strictly Come Dancing to the Fine City of Norwich.
Posted by Andy Yourglivch at 11:46