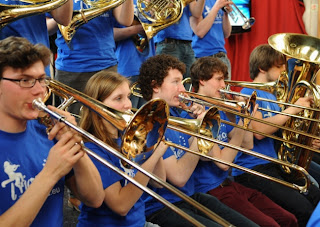 On the evening of Wednesday 10th April 2013 I attended the Triorca International Youth Orchestra's concert at St. Andrew's Hall, Norwich. The orchestra is made up of young musicians from Norfolk, Rheinland-Pfalz and Novi Sad. This was their first UK appearance conducted by their Artistic Director, Nicholas Daniel.

Wavefront Silhouette is a new work commissioned for the orchestra from Aldeburgh young musician, Xiaotian Shi. This piece was inspired by the sea and creates the sense of a journey going through the different emotions. Music has always been a common language and the sea links so many different countries, peoples and cultures together.

Benjamin Britten's The Young Person's Guide to the Orchestra was written in 1946 as the soundtrack to a film entitled The Instruments of the Orchestra featuring the London Symphony Orchestra conducted by Malcolm Sargent. The theme is taken from Henry Purcell's incidental music to Abdelazar, composed in 1695 for a revival of Aphra Behn's play originally written in 1676.

Shostakovich composed his Fifth Symphony in 1937 and was first performed in December of that year. The premiere was a huge success, and received an ovation that lasted well over half an hour. The composer had to be tactful in his approach by appearing to yield to pressure from the State while still retaining his artistic integrity.

This was a wonderful evening at Norwich's St. Andrew's Hall with the Triorca Orchestra providing us with a splendid programme of music played brilliantly with lots of enthusiasm. It was great to see this orchestra perform and they provide an inspiration to lots of people.
Posted by Andy Yourglivch at 00:05