The Siege of Calais at Norwich Theatre Royal 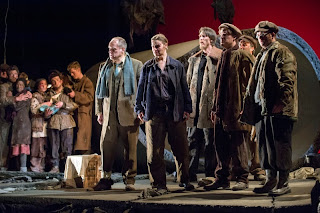 On Wednesday 27th March 2013 I attended the third of the English Touring Opera's productions at Norwich Theatre Royal. The final performance in this series of operas was Donizetti's The Siege of Calais (L'assedio di Calais) which was sung in Italian. This new production featured designs by Faroese artist Samal Blak, inspired by the siege of Stalingrad.

Due to illness director James Conway mimed the role of Eustachio, leader of the Calais resistance, while Cozmin Sime not only sang the King in the first scene but then the baritone part of Eustachio, the real hero of this story. Toby Girling substituted as Armando, one of the six men who volunteer to die that their city might be saved.  Even with these difficulties the English Touring Opera made this a night to remember at Norwich Theatre Royal with a brilliant performance.

The Siege of Calais is the story of the burghers of Calais (depicted by Rodin in his famous sculpture outside the Houses of Parliament), citizens who offer up their lives to save their city from a besieging army. Their sacrifice is quiet, ordinary, sublime and it culminates in one of the most moving ensembles in all of opera, the momentous O sacra polve, o suol natio (O Sacred Earth). The opera also includes poignant, intimate scenes between the young couple at the heart of the drama and between the leader of the city and his anguished followers. Meanwhile, at the gates, the triumphant Edward III shouts for blood.

This historical and serious opera was a big success for the English Touring Opera on a night when nothing was going to stop them telling this story of what it is to be a citizen and what that citizen owes to their city or country. This was a week with three brilliant operas in three nights from the English Touring Opera at Norwich Theatre Royal.
Posted by Andy Yourglivch at 11:17