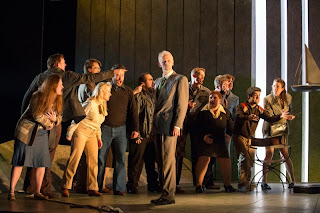 I was back at Norwich Theatre Royal on Tuesday 26th March 2013 to attend the English Touring Opera's performance of Verdi's Simon Boccanegra. This new production sung in Italian featured a twenty six piece live orchestra.

This is the English Touring Opera’s first new Verdi production for several years. The story comes from the history of Genoa, for centuries a great maritime republic, and from it Verdi creates an impassioned plea for Italian unity. This production was set in post-war Italy.

The composer’s musical depiction of the shimmering Mediterranean is wonderful; so too are the characters he creates, from the rough-hewn buccaneer-turned-ruler played by Craig Smith to his spiteful adversary and father-in-law Fiesco played by Keel Watson. Other characters include embittered traitor Paolo played by Grant Doyle and the idealistic Adorno played by Charne Rochford.

This was a massive undertaking for English Touring Opera, with an unusually large chorus and orchestra which was a personal ambition of General Director James Conway and Music Director Michael Rosewell, supported with a special grant from the Peter Moores Foundation.

At the end of the opera, Boccanegra is dying thinking of his youth, the freedom of the deep sea, and peace. Amelia and Adorno, newly married, come for his blessing and understand that he has been poisoned. Boccanegra names Adorno his successor. This was definitely my favourite opera of the three the English Touring Opera performed at Norwich Theatre Royal. Simon Boccanegra has a brilliant story combined with wonderful music.
Posted by Andy Yourglivch at 12:19