The Los Angeles Philharmonic and Dudamel at The Barbican 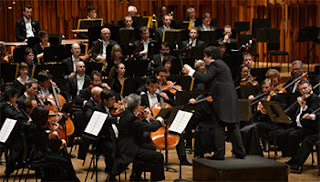 I was back in London on Sunday 17th March 2013 and after a visit to The Museum of London in the afternoon I attended the Los Angeles Philharmonic Orchestra's concert at The Barbican in the City of London. This was always going to be a thrilling night at The Barbican with the Los Angeles Philharmonic's Musical Director Gustavo Dudamel conducting a wonderful programme of music.

The story of Gustavo Dudamel and his remarkable journey from childhood in the El Sistema programme in Venezuela to Music Director of the Los Angeles is well known. On this special night at The Barbican the programme consisted of Zipangu - Vivier, La mer - Debussy and The Firebird (Complete) - Stravinsky.

The Canadian composer Claude Vivier was murdered in his Paris apartment in 1983. His legacy consists of some 49 works in a wide range of genres, including opera, orchestral works and chamber pieces. Zipangu was the name given to Japan at the time of Marco Polo. Composed in 1980 this piece was commissioned by the University of Toronto. Vivier wrote inthe note he provided for the score. 'Within the frame of a single melody I explore in this work different aspects of colour. I tried to “blur” my harmonic structure through different bowing techniques. A colourful sound is obtained by applying exaggerated bow pressure on the strings as opposed to pure harmonics when returning to normal technique. A melody becomes a colour (chords), grows lighter and slowly returns as though purified and solitary.'

Claude Debussy's La mer is a unique mix of tone-poem and symphony, a three-movement impression of the ocean. Composed between 1903 and 1905, La mer is a masterpiece of suggestion and subtlety in its rich depiction of the ocean, which combines unusual orchestration with daring impressionistic harmonies. The work has proven very influential, and its use of sensuous tonal colours and its orchestration methods have influenced many later film scores.

The Firebird is a ballet and orchestral concert work by the Russian composer Igor Stravinsky. It was written for the 1910 Paris season of Sergei Diaghilev's Ballets Russes company, with choreography by Michel Fokine. The ballet is based on Russian folk tales of the magical glowing bird of the same name that is both a blessing and a curse to its captor. The ballet was first performed on 25 June 1910 with spectacular results.

It was a brilliant experience to see the Los Angeles Philharmonic and Gustavo Dudamel live in concert at The Barbican. A World class orchestra at a world class venue being conducted by the most exciting conductor in the world. Vivier's Zipangu was a journey through sound played by thirteen string players. Debussy's La mer took us on a voyage across the ocean which was full of wonderful colours. The concert finished with Stravinsky's The Firebird flying around Barbican Hall like a magical bird. This performance was truly delightful from the Los Angeles Philharmonic and Gustavo Dudamel.
Posted by Andy Yourglivch at 11:46