Macbett at the UEA Drama Studio 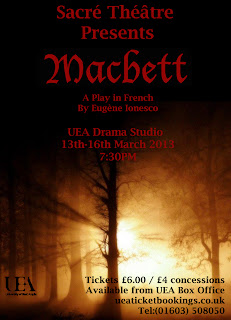 On the evening of Friday 15th March 2013 I attended the Sacre Theatre's performance of Eugene Ionesco's Macbett, a play in French at the UEA Drama Studio, Norwich. Written in 1972, Ionesco's satire on Shakespeare's play loosely follows the plot adding some characters and twists to the story.

Two generals, Macbett and Banco, put down a rebellion. In payment for their heroic service, Archduke Duncan promises to bestow on them land, titles and cash, but he reneges on the deal. Encouraged by the seductive Lady Duncan, Macbett plots to assassinate the Archduke and crown himself King. He tries to maintain his tenuous grip on the throne through a vicious cycle of murder and bloodshed. Meanwhile, he is haunted by the ghosts of his victims and discovers that his new wife is not all that she seems.

Written during the Cold War, Macbett remoulds Shakespeare's original play into a comic tale of ambition, corruption, cowardice and excess, creating a tragic farce which takes human folly to its wildest extremes. Innovations include a long conversation between the thanes of Glamiss and Candor and a lemonade seller and butterfly hunter, and the revelation that the rightful heir to the throne is a worse tyrant than Macbett ever was.

This was a brilliant night at the UEA Drama Studio with the Sacre Theatre who are a UEA staff-student theatre company which specialises in French language productions putting on a wonderful production of Macbett. It was a night of French culture which offered no ray of hope but was able to offer moments of humour throughout the play. I very much enjoyed Macbett which is a production that evokes a number of different emotions.
Posted by Andy Yourglivch at 11:41