Les Misérables at The Queen's Theatre 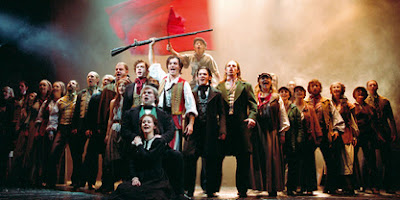 I saw the movie, now it was time to see the musical live on stage. On Thursday 14th March 2013 I travelled to London to see Les Misérables at The Queen's Theatre in London's West End. Seen by more than 65 million people in 42 countries and in 22 languages around the globe, it is still breaking box-office records everywhere in its 28th year.

Set against the backdrop of 19th-century France, Les Misérables tells an enthralling story of broken dreams and unrequited love, passion, sacrifice and redemption – a timeless testament to the survival of the human spirit. Ex-convict Jean Valjean is hunted for decades by the ruthless policeman Javert after he breaks parole. When Valjean agrees to care for factory worker Fantine’s young daughter, Cosette, their lives change forever. Featuring the songs I Dreamed A Dream, Bring Him Home, One Day More and On My Own. Les Misérables is the show of shows and is now a major motion picture.

The musical by Alain Boublil and Claude-Michel Schonberg is based on the novel by Victor Hugo. It was first performed at The Barbican Theatre in 1985. Produced by Cameron Mackintosh, Les Misérables exams the nature of law and grace, the story elaborates upon the history of France, the architecture and urban design of Paris, politics, moral philosophy, antimonarchism, justice, religion, and the types and nature of romantic and familial love.

It was a wonderful evening at a packed Queen's Theatre as I dreamed a dream. I loved the movie and I now love the stage version. At the end of the day this was a night I will never forget. They are Les Misérables, the outcasts, the underdogs.

Posted by Andy Yourglivch at 09:27