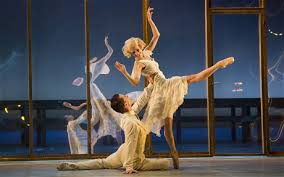 On Thursday 2nd May 2013 I attended the Northern Ballet's performance of The Great Gatsby at Norwich Theatre Royal. This production with choreography by David Nixon and music by Sir Richard Rodney Bennett CBE brought F Scott Fitzgerald's classic novel to the stage. We were taken to to the heady, indulgent days of New York's Long Island during the glamorous Twenties.

Nick Carraway comes to know his infamous neighbour Jay Gatsby, a mysterious millionaire with a secret past and a penchant for lavish parties and beautiful women. As the sparkling facade of Gatsby’s world begins to slip, Carraway comes to see the loneliness, obsession and tragedy that lies beneath. This era was brought to the Norwich Theatre Royal stage by designers Tim Mitchell and Jérôme Kaplan.

The Northern Ballet are great at story ballets and this is one that they can be very proud of. The costume design was absolutely stunning and beautiful. The ballet score played by the Northern Ballet Sinfonia contained all four elements of Sir Richard Rodney Bennett's diverse expertise: his symphonic work, film music, jazz and popular song.

I very much enjoyed this stylish and wonderful performance of The Great Gatsby from the Northern Ballet at Norwich Theatre Royal. This was a classic story told by dance as the magic of the Twenties, full of the sound of Jazz gave us a night of memories to treasure.
Posted by Andy Yourglivch at 06:48