The Pirates of Penzance at The Maddermarket Theatre 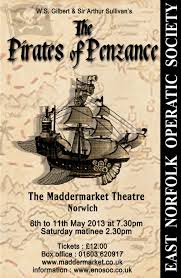 It's always wonderful to attend a Gilbert and Sullivan production and even more so at a venue like Norwich's Maddermarket Theatre. This year the East Norfolk Operatic Society performed The Pirates of Penzance which was their ninth show at The Maddermarket and I attended the performance on Wednesday 8th May 2013.

The story begins on a rocky seashore where the pirates are celebrating young Frederic's coming of age. He has completed his apprenticeship and is now about to become a full-fledged member of the crew. Frederic however shocks the pirate King and his men by announcing that he is leaving their band.

We find out that Frederic was mistakenly indentured to become a pirate when he was a child. Although he never approved of the pirates' plundering profession, he stayed with them because he was bound by his sense of duty. This same sense of duty, he tells them, now compels him to forsake them.

Frederic is about to marry his elder nanny Ruth, who has constantly accompanied him since he joined the ship, but he wants her to remain with the pirates. He has not seen another woman since he was eight years old, and he wants to compare Ruth with other women. He comes upon a group of beautiful maidens, all of them daughters of Major-General Stanley, and falls in love with the youngest, Mabel.

The pirates try to abduct the Major-General's daughters and marry them. But the Major-General begs for their release, claiming that he is an orphan, and that he would be all alone without them. The pirates, who are all orphans themselves, are sympathetic to him, and they give up their plans for marriage.

We find out that the Major-General lied to the pirates: He is not an orphan, and he now fears the consequences of his story. Frederic meanwhile has arranged for a Sergeant and his police force to help defeat his former buccaneering comrades.

Ruth and the Pirate King inform Frederic that through an unusual circumstance, he is still bound to remain a pirate. He reluctantly surrenders to his sense of duty and agrees to join them again. Mabel begs him to stay with her, but he sadly tells her that he cannot.

Meanwhile the pirates have planned their revenge on the Major-General and are now coming to rob his estate. The Sergeant and his police force await them. They meet. All is resolved after the ensuing battle.

We were treated to lots of fantastic musical numbers including A rollicking band of pirates we, Climbing over rocky mountains, I am the very model of a modern Major-General and Sighing softly to the river. They were all performed brilliantly with great enthusiasm by the East Norfolk Operatic Society. I greatly enjoyed this fun evening which included fantastic scenery and costumes. Next year they will be performing HMS Pinafore and Trial by Jury at The Maddermarket Theatre.

Posted by Andy Yourglivch at 13:18