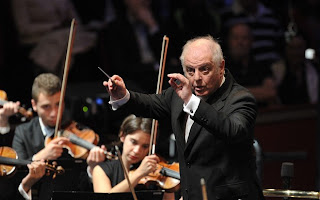 On the evening of Saturday 21st July 2012 I was back at the Royal Albert Hall for the BBC Proms for Prom 10 which featured the West-Eastern Divan Orchestra conducted by Daniel Barenboim as part of their series of performing all nine Beethoven symphonies at this year's Proms.

The West-Eastern Divan Orchestra was created in 1999 by Daniel Barenboim and Edward Said as a workshop for young musicians from Israel, Palestine and various Arab countries of the Middle East seeking to enable intercultural dialogue and to promote the experience of collaborating on a matter of common interest. The orchestra are named after a collection poems by Goethe, West-Eastern Divan, a central work for the evolution of the concept of world culture.

This was a night when Daniel Barenboim and his youthful ensemble were able to relish the energy of Beethoven's Fourth Symphony and then perform Eroica which is one of the most influential pieces of music in history. The Third Symphony is where Beethoven remakes the Classical style on a much greater scale with radical new techniques.

Between the two Beethoven Symphonies was Pierre Boulez's Dialogue de l'ombre double in which the audience were thrilled by Jussef Eisa's clarinet and the clarinet's electronic double which becomes more real then the soloist physically present. This is the conversation of the double shadow that proved to be progressive in the search for new sounds.

This was a brilliant evening to be in attendance at a packed Royal Albert Hall as I witnessed this concert from my seat in the Circle. It was a great decision to combine the music of Beethoven and Pierre Boulez at this series of concerts from the West-Eastern Divan Orchestra. The Beethoven Symphonies are some of the best music of all-time while Pierre Boulez is such an innovator who pushes the musical boundaries. You can't get much better then that.
Posted by Andy Yourglivch at 17:30