From Yucky Shampoo to Team Power!

It was another busy week of gigs in Norwich for me as I got to catch Gruff Rhys and Yuck at the Arts Centre and British Sea Power and the Go! Team at the Waterfront.

Last Sunday Gruff Rhys turned up at Norwich Arts Centre to promote his new album Hotel Shampoo with support from his backing band Y Niwi. It was another brilliant night of music from the Super Furry Animals frontman full of birds and shampoo. Not forgetting the Candylion!

It was back to Norwich Waterfront on Thursday night to see the Go! Team with support from Banjo or Freakout who as well as droning me out seemed to freak me out as well! Shine on you freaky dancer banjo or not!

It was all systems go with the Go! Team as they hit the floor running. They brought loads of energy to the Waterfront and put us all in a party mood with their lively fun set. By the end of the night they had us all trying to head butt the ceiling!

Saturday night belonged to Yuck at Norwich Arts Centre with support from 2:54 who took us on a rollercoaster ride of emotions. No leaves on the line tonight! Also supporting were Fanzine who had some typing errors, alas life is like that sometimes.

Yuck took to the stage big hair and all as they tried to join the major leagues with their grunge sound. They took us on a journey back to the future taking in Seattle circa 1991 on the way. Great energy from the band as they gave us a night to remember.
Posted by Andy Yourglivch at 14:10 No comments:

Norwich Cathedral echoes to the sound of Baroque!

Norwich Cathedral Consort and Norwich Baroque presented an evening of music from Bach and Handel last night. I made my way to the Cathedral in the cold looking forward to and evening of vibrant baroque music.

Norwich Cathedral is a beautiful and stunning venue to experience classical music. The programme of events were Bach's Zadok The Priest and Dixit Dominus. After the interval it was Bach's Magnificat.

Zarok the priest and Nathan the prophet anointed Solomon king and all the people rejoiced and said: "God save the king. Long live the king. May the king live forever. Amen."

Zarok the priest was composed by Handel using texts from the King James Bible, written to be played at the coronation of George II. It's a very rousing piece of music full of Amens with the chorus ending on "Allelujah".

Dixit Dominus was written by Handal during his first three year visit to Rome in 1707. This is a majestic masterpiece that brings to life Psalm 110. The Lord said unto my Lord: "Sit thou on my right hand, until I make thine enemies thy foot-stool."

During the interval I had an orange juice and relaxed in this truly stunning building. The second half of the programme was devoted to Bach's Magnificat that was composed in 1723 for the Christmas Vespers in Leipzig. The text was later altered by Bach to make it suitable for year-round performance. Magnificat is very striking and joyous that uplifted the spirits of everyone in attendance last night.

Thank you to the Norwich Cathedral Consort and Norwich Baroque for a brilliant night of music. They proved Baroque can be a way of life!
Posted by Andy Yourglivch at 05:28 No comments:

The Hold Steady asking us to stay positive!

It was a night of old fashioned Rock n Roll at Norwich Waterfront on Tuesday night with The Hold Steady and Wintersleep.

Wintersleep brought us melodic brilliance as they put a fire around our hearts. They were looking for ghosts as the guitars hit in. An excellent performance from this amazing band.

We all stood around like all the boys and girls in America waiting for The Hold Steady. It was well worth the wait!

If it's Old Skool that you want then The Hold Steady are the band for you. Dad Dancing in the USA if you must! The band have got cigarettes for eyes but they know that all the South Town girls will stay. Definitely a reason to stay positive!
Posted by Andy Yourglivch at 06:53 No comments:

﻿﻿On Saturday 12th February 2011 Norwich Music Group presented a performance of John Rutter's Requiem and Beethoven's Piano Concerto No 4 at St Peter Mancroft church in Norwich. The evening was in aid of Cancer Research UK.

Conductor for the evening was Philip Aldred. While Rebecca Chambers and Sonia Waters were the soloists for this delightful night of Classical Music.

I must say that I really enjoyed the evening. Concerto No 4 is full of surprises with the announcement of the main theme by the soloist rather then the orchestra giving it a progression from Beethoven's earlier concertos'.

The second half of the evening was a performance of John Rutter's Requiem that was of the highest quality and well received by the audience. I would highly recommend an evening of Classical Music in one of Norwich's historical churches. They perfectly compliment each other.
Posted by Andy Yourglivch at 06:24 No comments:

I arrived at Norwich UEA on Friday night with the queue of excited fans stretching back to Congregation Hall all looking forward to seeing Crystal Castles, Magnetic Man, Everything Everything and The Vaccines on the NME Awards Tour.

The Vaccines opened the night putting smiles on a lot of faces with their short sharp indie sound. They put a lot of power and energy into their set which will get all Indie fans buzzing with excitement.

Magnetic Man filled the UEA stage with all their hardware and soon they had stolen everyone's soul. There set was full of energy that had us all hitting the dance floor hard. They reached a high when they turned all the girls into Katy B's! In the end the UEA LCR was like a field on the M25. Dubstep has arrived and we're all hooked.

It was a complete wall of noise when Crystal Castles made their entrance with Alice Glass on crutches. Only Alice could make crutches Rock n Roll. Crystal Castles are Digi-Punk Gods. Believe whatever you want to believe but it seems that they are like a Modern Art statement in the name of Rock n Roll. It was another awesome performance from Ethan Kath and Alice Glass, they always seem to deliver live leaving a trail of destruction behind them.

Once again we have to thank NME for putting on another brilliant tour. No doubt we will do it all again next year.
Posted by Andy Yourglivch at 13:35 No comments:

Imelda May takes us back to the Fifties! 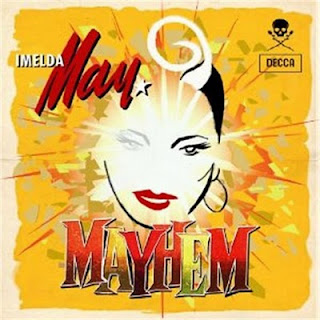 Imelda May was at Norwich UEA on Wednesday night supported by Big Boy Bloater as we were transported back to the Fifties.

Big Boy Bloater was giving it all he's got. In no time he will turn into a wolf. It was brilliant when he got his mojo working. Oh yeah it's all gone Music Hall at the UEA!

Imelda May caused total mayhem when she took to the stage. Looking stunning in her red and black polka dot dress she took us on a Rock n Roll journey mixed with rockabilly, country and blues.

Johnny got a boom boom yes indeed. Imelda May shows that she is Dublin's finest as well as a true star with a ninety minute set that completely enchanted the whole audience.

She is so enthusiastic about her music with an amazing knowledge of it's history and influence. She put her own style all over Tainted Love. It's lots of fun with Imelda May, definitely a night to remember.
Posted by Andy Yourglivch at 13:58 No comments:

Funeral Party win over the spirits!

I was back at Norwich Arts Centre on Sunday night for the Funeral Party gig with support from Flashguns and Yaaks. First on stage were Yaaks who opened the night with lots of energy, racing through their songs as they jumped up and down. They definitely needed a sit down after their performance!

Flashguns got us all up as they got going. They may have a different kind of passion but they are still  looking for a good time. They are looking up at the lights as they try to bring melody to their sound. Crashing out on a high Flashguns put us all in a good mood.

Funeral Party arrived at Norwich Arts Centre with high expectations and were able to keep the spirits at bay and came up as winners in the end. Put your hands in the air and clap, this is the way to LA. They made a big bang, indie cool with an attitude that will take you on an journey into the unknown. Disco Punk that will get you moving. New York City Moves To The Sound Of LA echoes around the auditorium and everyone including all the spirits at Norwich Arts Centre are smiling.
Posted by Andy Yourglivch at 12:31 1 comment:

Norwich Arts Centre was put under a spell of darkness last night as I Like Trains brought their black brand of Indie to this Fine City. The support was provided by Napoleon IIIrd and Collider.

There was no surprises that Collider were gloomy and dark. Watch out for snakes with wings. A dark warning from Collider! As well as songs about ghosts they told a joke about Huddersfield to prove they have a lighter side. They finished their set with loads of Post Rock guitars.

Napoleon IIIrd were digging deep on drums and keyboards. They wanted us to dance to their experimental dance with a Post Punk edge. Dance with the dark vocals and Napoleon IIIrd will carry on marching.

I Like Trains made an dramatic entrance as they took us into the tunnel and looked us straight in the eye. The truth is out there somewhere. Gloom merchants of the highest order, I Like Trains took us to a very dark place with lyrics full of black and the serious side of life. In return Norwich gave them an afternoon at Jarrold Department Store and The Mustard Shop.

The pleasure of dying at your feet is all mine. You say that you see right through me. You stare into my soul and my lung collapses. I Like Trains can turn on the dramatic mixed with loud guitars. They are geeks from the darkside.
Posted by Andy Yourglivch at 05:07 No comments:

The winds of change 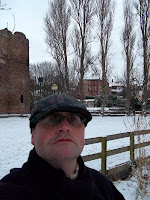 The wind is blowing through the streets as we all shelter from the cold and the rain. Oh where has all the sunshine gone and all the Summertime joy. We all dream of fields of flowers and butterflies on hot lazy days when we haven't got a care in the world.

As the wind sends a chill across our faces it makes us stop and think of fun times that will return in time when the beach will be full of fun and games. A seagull is flying across the sky while a squirrel runs along the village green as the day is greeted by grey clouds.

Big winter coats are the fashion of the day with scarfs and gloves to keep the freezing cold away. Cold winds from the North maybe blowing up a storm today but tomorrow will bring calmer waters when we will row down the river in chinos and short sleeves eating strawberries and cream.
Posted by Andy Yourglivch at 17:39 No comments: