On 21st December I went to my 81st and last gig of 2010 to see Fever Fever headlining at Norwich Arts Centre. The brilliant support was provided by Follow Your Heart, Transept and Lilith.

Lilith was first on stage with her gypsy influenced folk music which filled us all with comfort and joy. Transept then brought some magic with an air of mystery mixed with an ambient beat. It was then left to Follow Your Heart to declare that you should follow your heart if you are a talking head or if you are young and full of life!

It was now time for the headliners Fever Fever to take to the stage bringing all their energy and anger as they made a statement to change the world. The whole auditorium was filled with a barrage of noise. The trio made up of Rosie Arnold, James "Smit" Smith and Ellie Jones with their short sharp songs leave you breathless as an aural whirlwind seems to mix up all your senses.

I highly recommend that you check out The Bloodless EP with a tracklisting of Bloodless, Static, Butcher's Shop, Mouth House and Black Lung. It's a damn good listen as Fever Fever carry on a long tradition of Norwich Art Punk bands.

Merry Christmas and a Happy New Year to everyone! Many thanks to Norwich Arts Centre for putting on loads of brilliant gigs in 2010. Here's looking forward to many more in 2011.
Posted by Andy Yourglivch at 02:40 No comments:

Norwich is full of the wonders of Christmas

Oh the snow is falling on Gentleman's Walk as the Citizen's of Norwich are busy shopping for Christmas. Each snow flake that falls is as unique as each and everyone of us. Christmas carols can be heard being sung at St Peter Mancroft Church. Ding dong merrily on high.

Bright lights and decorations everywhere. Oh this is the season to be jolly. The temperature maybe cold but inside we are all full of the warmth of Christmas. Winter coats, scarves and gloves topped by a fetching hat is the fashion of the day. Warming cups of potato and leek soup are a must on a night like this.

We're all counting the days until Christmas Day arrives full of excitement and wonderment. From Norwich Lanes to Chapelfield the shops are full of busy Christmas shoppers looking for that last minute gift for a loved one. Smiling faces can be seen everywhere as the Citizen's of Norwich spread the spirit of Christmas.
Posted by Andy Yourglivch at 04:14 No comments:

Keeping it loose at The Music House!

It was another Friday night at The Music House last night with a night of acoustic music. I made my way down to Jurnet's Bar which is a 12th Century cellar at Wensum Lodge in Norwich.

Last night there was no PA so it was truly an all acoustic night. First up were Ben Grizzly and Chad who are collectively known as The Loose Leaf Drifters. This was the first of three gigs they were doing on the night. With Chad on the piano they took us to the marshes with songs about Marsh Men!

Joe Potter may seem like an angry young man but his songs of protest have the ability to stir the emotions. The Coalition Government have been warned! Johnny Steinberg not to be confused with Johnny Sivebeck took us on a journey around the world with his wit and humour. From Australia to New York via a dodgy hotel in Bristol. He definitely needs water!

The Woodland Creatures with the aid of an acoustic guitar and recorder performed songs to warm the heart. They were well received by everyone in attendance as they took us on a journey through the woodlands. Jess Morgan finished the night on a high with a set of quality songs. With her distinctive voice she showed her talent as she looked for love at the library. She nearly got upstaged by a drunken fan but no one was going to up stage Jess as her talents shone through.
Posted by Andy Yourglivch at 06:11 No comments:

The Wedding Present Are Bizarro Brilliant!

﻿﻿ ﻿﻿ On Thursday night The Wedding Present played at Norwich Waterfront to celebrate the 20th Anniversary of the release of their Bizarro album.

The Jet Age from Washington DC were the support band who brought their Husker Du influenced sound complete with fuzzy guitars, pounding bass and some top class drumming. They are a excellent power trio who kept the crowd entertained before the main event of the evening.

The Wedding Present frontman David Gedge seemed to be really enjoying himself taking us back to the late Eighties and early Nineties on a rollercoaster of a nostalgia trip. Brassneck, Brassneck I just decided I don't trust you anymore reverberated around the venue and we all felt twenty years younger.

David Gedge said that Gedge is a Norfolk name and that he was now truly at home. When he mentioned Ipswich there was laughter as cries of Scum were heard around the venue. This was a very memorable night at Norwich Waterfront to make you realise the brillance of Indie Music in the late Eighties which has stood the test of time very well. We salute you David Gedge!
Posted by Andy Yourglivch at 10:44 No comments:

Jenny and Johnny having fun!

I was back at Norwich Arts Centre in the evening for the main event. Jenny and Johnny with support from La Sera. In the afternoon I stood on the main stage during Clutter City and dreamed of Jenny Lewis being on the stage. Now my dream was coming true!

Back in 2005 I saw Jenny Lewis with her band Rilo Kiley at Norwich Arts Centre. She was back this time as Jenny and Johnny. I'm Having Fun Now is an excellent album from the romantically involved couple and well worth a listen.

La Sera fronted by Katy Goodman brought their scuzzy dream pop with added thrills that warmed  us nearly as much as the veggie chilli did in the afternoon! Sunny vibes from Los Angeles to warm all our hearts.

As soon as Jenny Lewis and Johnathan Rice hit the stage everyone in the auditorium were transfixed by their performance. As Johnny said they are from somewhere else. Merging voices and exchanging lines it's like they are having banter with each other just like a married couple putting their relationship on stage and record. They seem to be having lots of fun.

Living your life in the gray is the new American way, we're spending what we haven't made. It's going to hit you with a Big Wave! You've been sniffing up that mercury from a broken thermometer like a cloud gatherer, just like Zeus! You used to dine out on a dollar with a switchblade in your coat. You had your young mind in the gutter. You had your feet on the ground!

Big Wave, Just Like Zeus and Switchblade just three examples of brilliant lyrics from Jenny and Johnny. One of the highlights of the show was Jenny Lewis singing Acid Tongue that was awe inspiring. Before singing Switchblade Johnny wanted us to explain about all the dead bodies at Norwich Arts Centre if we didn't think Norwich was a stabby place. Jenny said that the previous night in Leeds they had been in a stabby place.

During the encore a girl from California joined them on stage from the audience. It's always Americans who put their hands up and volunteer. This was definitely one of my favourite gigs of the year. Jenny and Johnny are brilliant live. Show your teeth to everyone don't let no one prove you wrong. You are an animal, an animal an animal! Take these words from Jenny and Johnny and start having fun!
Posted by Andy Yourglivch at 11:47 No comments: 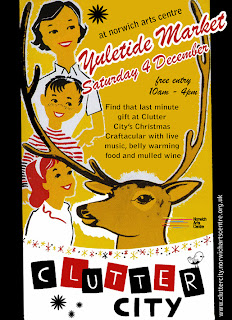 On Saturday I made my way to Norwich Arts Centre for Clutter City which is a platform for creative independent crafters, artists and collectives to sell their work. Focusing on original, quirky and unique items including DIY clothes, jewellery, badges, sewn items, paper goods, prints, paintings, comics, zines and more!

The music was provided by Magic Panda, Rory McVicar and Milly Hirst. On arrival I ordered a portion of the very tasty veggie chilli! On stage first was Milly Hirst who brought her emotional and thought provoking songs to the Cafe Bar that warmed up a cold Saturday afternoon.

Rory McVicar was next with his usual entertaining talking between songs. He was full of Christmas cheer with an amazing version of Silent night. Magic Panda finished the afternoon in top style with his highly entertaining Electronica that had everyone tapping their feet!
Posted by Andy Yourglivch at 10:03 No comments:

Cakes and Ale with added smiles!

Jurnet's Bar at Wensum Lodge hosts Music House every Friday night bringing a mix of exciting and inventive music to this King Street venue in Norwich. Please come along sometime for a great night's entertainment in this 12th Century cellar bar.

Last night it was the turn of Cakes and Ale, Takeda, Feral Mouth and Frost and Mudd to provide the entertainment. A large crowd made it through the difficult weather conditions to provide a great atmosphere.

Josh from Takeda did a solo set to start the night off in style. It was then the turn of Frost and Mudd to take up the baton and with style. They put us in a state of emergency with cello and acoustic guitar complete with haunting Americana lyrics.

Feral Mouth were next to take to the stage bringing southern fried tunes with humour and wit. It was then up to Takeda to take us to a darker place. The dark cellar is the perfect place to see Takeda where the dark droning atmosphere of their lyrics complete with a constant drum beat feels very much at home.

Headliners Cakes and Ale created a very uplifting atmosphere which put a smile on everyone's face as they tried to play every instrument apart from the kitchen sink. Their folk music is so lively. It's like it's just been made up on the spot. They are an amazing collective of talented musicians who are brilliant live.
Posted by Andy Yourglivch at 08:46 No comments:

﻿﻿It was a freezing cold night in Norwich as I made my way to Norwich Arts Centre to see Dark Dark Dark with support from Three Beards on Wednesday. I made sure I was suitably dressed with red beanie hat and gloves to keep out the cold!

First on stage were Three Beards who brought a taste of Eastern Europe to Norwich Arts Centre. Full of vodka, cossacks and Russian folk music. They definitely put on a lively performance.

Dark Dark Dark proved they had the quality and character to light up the auditorium with a  captivity performance of their chamber-folk. It was vintage music which took you on a dreamy tour of Old America. Nona Marie Invie is at ease on stage with her vocals which give Dark Dark Dark a sound that is a mix of Regina Spektor and Arcade Fire, evoking thoughts of  Régine Chassagne.

With an accordion, banjo, cello, castanets and piano they sound like they belong to a bygone age. You could say they are more 19th Century then 21st Century which I found very enchanting. It was a very enjoyable evening and well worth the trip in the cold to Norwich Arts Centre which is almost the perfect venue for Dark Dark Dark.
Posted by Andy Yourglivch at 09:47 No comments: