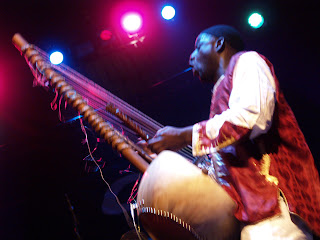 Seckou Keita is a kora player and drummer from Senegal. He is a charismatic live performer and one of the few champions of the less-known and rhythmically rocking kora repertoire from Casamance in southern Senegal. On Saturday 3rd November 2012 I attended his concert at Norwich Arts Centre which was the finale of Norfolk Black History Month.

His new album Miro has just been released and this was the perfect night for Seckou Keita to showcase his music which is influenced by his West African roots and travels around the world. His music put smiles on everyone's faces and got lots of the crowd dancing on a night of positive vibes at Norwich Arts Centre.
Posted by Andy Yourglivch at 15:26