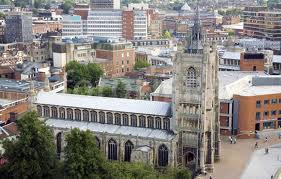 The most celebrated British composer of the 20th century, Benjamin Britten was a giant of the world stage whose roots were firmly in East Anglia, his music inspired by its landscapes and sea. He was born in Lowestoft on 22nd November 1913, schooled at Greshams, Holt, gave numerous performances in Norwich and lived most of his life in Aldeburgh. Under the Familiar Fields banner, musical and artistic organisations across Norfolk and Suffolk have come together to promote events celebrating the centenary.

The programme consisted of Friday Afternoons, The Salley gardens, Little Sir William, Prelude and Fugue on a theme of Vittoria (Organ solo), The Ash Grove, O Waly, Waly and Three two-part songs. This was a wonderful celebration of Benjamin Britten which began with Friday Afternoons, which is a set of 12 songs composed by Benjamin Britten between 1933 and 1935. The simple songs, with witty piano accompaniments, are dedicated to Britten’s schoolmaster brother, Robert, and the boys of Clive House preparatory school, Prestatyn, a school in which choir practice and singing lessons regularly took place on a Friday afternoon.

The next two songs performed were were The Salley gardens which is a Irish tune with words by W.B. Yeats and Little Sir William, a Somerset folksong. Julian Haggett performed the organ solo before The Ash Grove, a welsh tune and O Waly, Waly a folksong from Somerset were sung. The recital finished with Three two-part songs which included The Ship of Rio which ends with a scampering of monkeys across the sand. This was a splendid event at St. Peter Mancroft Church which I greatly enjoyed.
Posted by Andy Yourglivch at 12:25