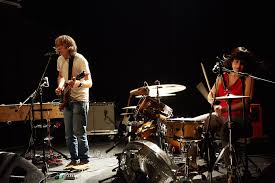 On Thursday 12th December 2013 I attended the Quasi gig at Norwich Arts Centre with support from Girl in a Thunderbolt. This was the last Twee Off night after four years of amazing gigs and nearly one hundred different acts.

Girl in a Thunderbolt is Norwich singer Maria Uzor who gave us an amazing set of songs to warm us up for the main act. Tracks like War Cry, Dopamine and Runaway were very well received at the St. Benedict's Street venue.

Quasi are Ex-husband and wife Sam Coomes and Janet Weiss who were touring their latest album Mole City. They have an amazing history of being in acts as legendary as Sleater-Kinney, Stephen Malkmus and the Jicks, Elliot Smith, John Doe, Pink Mountains, Wild Flag and Built To Spill. In addition they have played as Quasi for twenty years and released eight albums.

Quasi were brilliant and gave us a night of Visceral Trash Music. See You On Mars, Our Happiness Is Guaranteed and I Never Want to See You Again are all fantastic tracks. Quasi finished the gig with an encore of War Pigs and Let's Get It On covers. This was night when Norwich Arts Centre belonged to Portland, Oregon.
Posted by Andy Yourglivch at 13:15