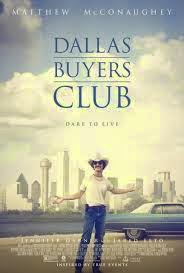 Norwich Cinema City was full for the viewing of Dallas Buyers Club on the evening of Thursday 6th March 2014. I was able to purchase the last seat available for the screening. A few days earlier Dallas Buyers Club was awarded three Oscars at the Academy Awards. Matthew McConaughey for Best Actor, Jared Leto for Best Supporting Actor and the movie won the Oscar for Best Makeup and Hairstyling.

Matthew McConaughey stars in Dallas Buyers Club as real-life Texas cowboy Ron Woodroof, whose free-wheeling life was overturned in 1985 when he was diagnosed as HIV-positive and given 30 days to live. These were the early days of the AIDS epidemic, and the U.S. was divided over how to combat the virus. Ron, now shunned and ostracized by many of his old friends, and bereft of government-approved effective medicines, decided to take matters in his own hands, tracking down alternative treatments from all over the world by means both legal and illegal.

Bypassing the establishment, the entrepreneurial Woodroof joined forces with an unlikely band of renegades and outcasts - who he once would have shunned - and established a hugely successful "buyers' club." Their shared struggle for dignity and acceptance is a uniquely American story of the transformative power of resilience.

Dallas Buyers Club is a brilliant and moving movie with lots of fantastic performances especially from Matthew McConaughey and Jared Leto. This has to be one of the best movies of the year and a packed Norwich Cinema City was a great place to see it.
Posted by Andy Yourglivch at 13:08