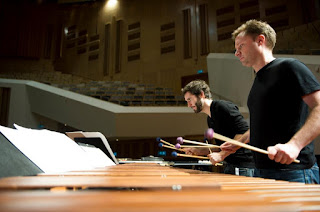 On Thursday 23rd May 2013 I attended Britten Sinfonia's Norfolk and Norwich Festival concert at St. Andrew's Hall, Norwich. This was an exciting performance from this adventurous ensemble which combined complex minimalism with cross-genre inventiveness.

Shaker Loops was composed by John Adams in 1978, it was originally written for string septet and a version for string orchestra followed in 1983. It began as a piece called Wavemaker in which Adams tried to emulate the ripple effect of bodies of water in his music. The piece was a commercial failure, but Adams kept the idea of repeating loops of oscillations on string instruments. He retitled the piece Shaker Loops, both because of the shaking of the strings as they oscillate between notes and the idea Adams had of Shakers dancing to repetitive, energetic music.

Nico Muhly composed Seeing is Believing in 2007, the piece blends electronic fusion and Tudor motets. The composer said that Seeing is Believing references the ancient practice of observing and mapping the sky. The electric violin reminded him of the 1980s and he tried to reference the music attendant to 80s educational videos about science. The piece ends as it began, with looped educational music depicting the night sky.

Double Standard was written by Nico Muhly for Colin Currie and the finalists in last year's TROMP Percussion Competition, won by Alexandre Esperet. This was the piece's UK premiere and is a single movement concerto for two percussionists. Nico Muhly wanted the solo parts to highlight not just technical dexterity but also the do-it-yourself practical knowledge that all great percussionists have.

John Adams composed the Chamber Symphony in 1992, the piece was commissioned by the Gerbode Foundation of San Francisco for the San Francisco Contemporary Chamber Players. It was written for fifteen instruments and bears a resemblance to its eponymous predecessor, the Opus 9 of Arnold Schoenberg. The Chamber Symphony is broken into three discrete movements, Mongrel Airs, Aria with Walking Bass and Roadrunner.

This was a brilliant night to be present at St. Andrew's Hall as Britten Sinfonia brought us the musical delights of John Adams and Nico Muhly. I was very excited about hearing Shaker Loops live and hearing the music of Nico Muhly. John Adams's Chamber Symphony was the highlight of the concert for me. It was full of kinetic energy and had so much going on.
Posted by Andy Yourglivch at 13:49