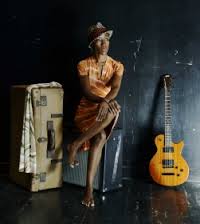 On the evening of Tuesday 21st May 2013 I attended the Rokia Traore concert at Open, Norwich. This Norfolk and Norwich Festival event featured this fantastic Malian singer who was showcasing her new album, Beautiful Africa which was produced by John Parish. I saw her at the Barbican in London last year and I was looking forward to seeing her perform in my home city.

Rokia Traore was most recently seen in the UK as part of Damon Albarn's Africa Express. Her music is the sounds of Malian roots, blues, rock, jazz and folk. She has been described as the most adventurous female singer in Africa and has a striking stage presence.

The concert was delayed by fifty minutes, but this didn't damp any of the enthusiasm of the large crowd in attendance at Open as we looked forward to seeing Rokia Traore perform her amazing music. She apologised for being late for the first time in her fifteen year career before playing a ninety minute set.

This was a concert full of energy and wonderful music as Rokia Traore and her band filled the venue with the sounds of Africa. The lyrics of her songs are in French and Bambara, that expressed a mixture of emotions, both sad and joyful. This was a brilliant night at Open as Rokia Traore showed why she is such a big star in her native Mali with an emotional performance that moved and greatly entertained the Festival crowd.
Posted by Andy Yourglivch at 12:07