The Clarinet Trio at The Assembly House 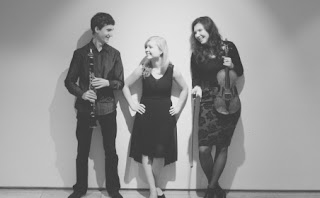 At lunchtime on Wednesday 22nd May 2013 I attended the last of this year's Royal Academy of Music Concerts at The Assembly House, Norwich as part of the Norfolk and Norwich Festival featuring the Clarinet Trio. This was another wonderful concert brought to us in the annual visit to the Festival by virtuosi from the Royal Academy of Music.

The Marchenerzahlungen (Fairy Tales) was composed by Robert Schumann in 1853 which was the year that saw his first meeting with Johannes Brahms. This piece has echoes of Schumann's earlier works. These Fairy Tales seem like an escape into musical fantasy.

Gyorgy Kurtag's Hommage a Schumann was composed in 1990 and is one of the most exciting pieces in the clarinet, viola and piano repertoire. It is directly linked to Schumann's Fairy Tales through its title and instrumentation. The final movement Farewell creates a procession like atmosphere that ends with a heavy bass drumbeat played by the clarinet.

The Acht Stucke was written by Max Bruch in 1910 and was dedicated to Princess zu Wied. His attention to the combination of viola and clarinet resulted in some wonderful repertoire. Bruch recognised that the instruments were in the same register. The composer's son Max Felix Bruch was an exceptionally talented clarinettist who was compared to Richard Muhlfeld.

This was a fantastic finish to this year's Royal Academy of Music Concert Series with a very enjoyable and strong performance from the Clarinet Trio. The Assembly House is full of life during the Festival and with brilliant music like this, it is always a joy to visit.
Posted by Andy Yourglivch at 21:45