Frisky and Mannish at the Spiegeltent 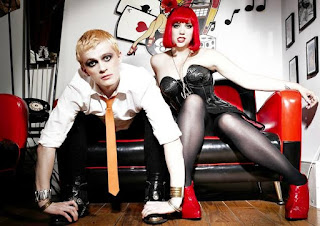 Comedy cabaret double-act Frisky and Mannish specialise in mad musical mash-ups that unearth the hidden meanings in some pop classics and poke fun at the ridiculousness of the songs we know and love. After Meow Meow cancelled her Feline Intimate performance at the Norfolk and Norwich Festival, Frisky and Mannish were added to the bill in the Chapelfield Spiegeltent.

On Friday 24th May 2013 I made my way to Chapelfield Gardens looking forward to a fun night in the Spiegeltent. Frisky and Mannish are pop educators and you need to pay full attention if you want to be top of the class at the School of Pop.

A packed Spiegeltent greatly enjoyed an evening of musical comedy cabaret as we were all given some Extra Curricular Activities. A meeting between Noel Coward and Lily Allen was the highlight at the School of Pop. There was a guest appearance from Dido as well as an Elizabethan take on TLC's No Scrubs. Bonnie Tyler's Total Eclipse of The Heart was turned into a horror movie soundtrack as Frisky and Mannish brought the sounds of pop and lots of laughs to the Spiegeltent.
Posted by Andy Yourglivch at 23:17