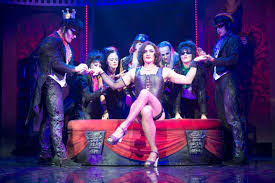 On Tuesday 4th June 2013 I attended Richard O'Brien's Rocky Horror Show at Norwich Theatre Royal. This was an all new 40th anniversary party production of the rock n roll musical. It was a night full of fun, frolics and frivolity. Lots of the audience had dressed up for the show, helping to turn the Rocky Horror Show into a non-stop party.

The Rocky Horror Show is a humorous tribute to science fiction and horror B movies, the musical tells the story of a newly engaged couple getting caught in a storm and coming to the home of a mad transvestite scientist unveiling his new creation, a muscle man named Rocky Horror. Squeaky clean sweethearts Brad and Janet are on an adventure they'll never forget as they meet Frank n Furter and Magenta.

There were brilliant performances from Oliver Thornton as Frank n Furter, Abigail Jaye as Magenta, Dani Harmer as Janet, Sam Attwater as Brad and Henry Davis as Rocky. Philip Franks was a fantastic narrator. The Rocky Horror Show is bursting at the seams with timeless classics including Sweet Transvestite, Damn it Janet and Time Warp.

We all had the rockiest ride of our lives at Norwich Theatre Royal and it was great fun doing the Time Warp again and again. The Rocky Horror Show is an opportunity to have a great time and lose your inhibitions. Don't dream it, be it.
Posted by Andy Yourglivch at 02:12