Noises Off at Norwich Theatre Royal 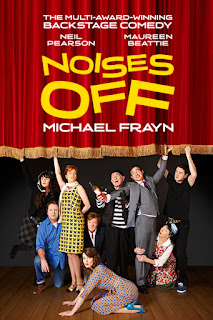 On Saturday 25th May 2013 I attended the matinee performance of Noises Off at Norwich Theatre Royal. This Old Vic production is a multi-award winning backstage comedy which was touring after its triumphant and critically acclaimed sell out run in London. Hailed as one of the greatest British comedies ever written, Michael Frayn's celebrated play serves up a play within a play.

Each of the three acts of Noises Off contains a performance of the first act of a play within a play, a poor farce called Nothing On. This is the type of play in which young girls run about in their underwear, old men drop their trousers, and many doors continually bang open and shut. It is set in a delightful sixteenth century posset mill modernised by the current owners and available to let while they are abroad, the fictional playwright is appropriately named Robin Housemonger.

Act One is set at the dress rehearsal at the fictional Grand Theatre in Weston-Super-Mare, the cast are hopelessly unready, and baffled by entrances and exits, missed cues, missed lines, and bothersome props, including several plates of sardines. Act Two shows a Wednesday matinee performance one month later, at the again fictional Theatre Royal in Ashton-under-Lyne. In this act, the play is seen from backstage, providing a view that emphasises the deteriorating relationships between the cast that lead to offstage shenanigans and onstage bedlam. The play falls into disorder before the curtain falls.

In Act Three, we see a performance near the end of the ten-week run, at the still fictional Municipal Theatre in Stockton-on-Tees, when personal friction has continued to increase. The actors remain determined at all costs to cover up the mounting series of mishaps, but it is not long before the plot has to be abandoned entirely and the more coherent characters are obliged to take a lead in ad-libbing somehow towards some sort of end.

Much of the comedy emerges from the subtle variations in each version as character flaws play off each other off-stage to undermine on-stage performance, with a great deal of slapstick. The contrast between players' on-stage and off-stage personalities is also a source of comic dissonance.

There were wonderful and funny performances from Neil Pearson, Maureen Beattie, David Bark-Jones and Sasha Waddell as Norwich Theatre Royal was filled with lots of laughter. This was a very enjoyable afternoon as this clever and funny play directed by Lindsay Posner gave us numerous moments of humour which may have appeared as shambolic but were brilliantly timed. Noises Off was perfect comedy entertainment.
Posted by Andy Yourglivch at 15:38