An evening of 19th century song at The Assembly House 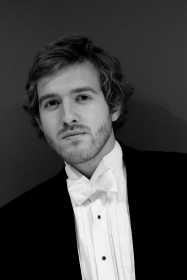 I was back at The Assembly House, Norwich on the evening of Monday 20th May 2013 for the Sam Furness and Matthew Fletcher concert at the Norfolk and Norwich Festival. This concert was in the Royal Academy of Music Concert Series which has become a vital and much-loved feature of the Festival.

This varied programme of chanson and lieder provided a wonderful overview of 19th century song which featured works by the leading masters of the genre. Tenor Sam Furness and Pianist Matthew Fletcher opened the concert with Schubert's An die Leier, a song published in 1826 that is a setting of a poem by Franz von Bruchmann which is based on the sixth century BC Greek satirical poet Anacreon.

Robert Schumann's Dichterliebe song cycle was written in 1840 with texts taken from Lyrisches Intermezzo, a set of poems written in 1822-23 by Heinrich Heine. Schumann chose twenty to set to music with a dramatic narrative, however only sixteen of the resulting songs made it into the first edition. Fantasiestucke is a selection of eight solo piano pieces written by Schumann in 1837, inspired by the selection of short stories Fantasiestucke in Callots Manier by E.T.A. Hoffman.

Chason Triste was written by Henri Duparc in 1868 to a poem by Henri Cazalis. who wrote under the nom de plume Jean Lahor. Oh! Quand je dors was written in 1842 by Franz Liszt as a setting to a poem by Victor Hugo. The song calls for the singer's beloved to come to him while he sleeps.

An die Ferne Geliebte is widely considered to be the first ever song cycle. This set of songs was composed by Beethoven in 1816 to poems by Alois Isidor Jeitteles. It is a selection of reflections by the poet as he sits on a hill thinking of his beloved, from whom he is separated.

Etude No.3 was composed by Chopin in 1832 and was dedicated to his friend Franz Liszt. Chopin considered it to be his most beautiful composition. Franz Liszt's Three Petarch Sonnets were published in 1846 but were composed several years earlier. Liszt set sonnets by the Italian poet Petrarca who, having seen a woman called Laura in church, was inspired to write Rime Sparse. The songs were written in a very emotional, Italianate style to match the poetry.

This was a brilliant night to be at The Assembly House as the large audience in attendance were treated to a night of chanson and lieder in French, German and Italian. Sam Furness, who is already establishing an international profile and Matthew Fletcher, winner of numerous prizes at the Royal Academy of music put on a performance of the highest quality which was one of my musical highlights at this year's Festival.
Posted by Andy Yourglivch at 00:21