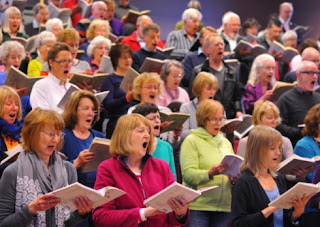 On Sunday 26th May 2013 I attended the London Philharmonic Orchestra and Festival Chorus concert at St. Andrew's Hall, Norwich which was the final event of this year's Norfolk and Norwich Festival. This special performance of Verdi's Requiem was celebrating the 200th anniversary of the composer's birth.

David Parry was conductor on the evening. Also performing were Nadine Koutcher - soprano, Rosie Aldridge - mezzo-soprano, Gwyn Hughes Jones - tenor and Graeme Broadbent - bass. Verdi's Requiem is an electrifying masterpiece with an intense and utterly compelling marriage of liturgy and opera. It raises the spirituality and emotion of the Latin mass to the pinnacle of high drama.

Verdi's Messa da Requiem is a musical setting of the Roman Catholic funeral mass (Requiem) for four soloists, double choir and orchestra. It was composed in memory of Alessandro Manzoni, an Italian poet and novelist much admired by Verdi. The first performance in San Marco in Milan on 22 May 1874 marked the first anniversary of Manzoni's death. The work was at one time called the Manzoni Requiem. It is typically not performed in the liturgy, but in a concert.

This was a fantastic way to bring this year's Festival to a dramatic finish as the sounds of Verdi's Requiem filled St. Andrew's Hall. The London Philharmonic Orchestra and the Festival Chorus along with all the soloists were brilliant and created an night of magical music, with lots of emotion and intensity. Yet again Norwich can be proud of putting on a wonderful Norfolk and Norwich Festival.
Posted by Andy Yourglivch at 15:04