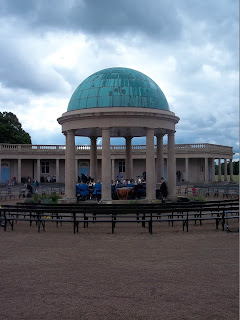 On Sunday 23rd June 2013 I attended the Cawston Band concert at Eaton Park, Norwich. This concert was part of Norwich City Council's Bandstand Concert Series organised by Brian Dermott, which are taking place every Sunday from June to August in various Norwich parks.

Cawston Band prides itself on its reputation for versatility and quality. The band competes nationally on a regular basis, whilst also maintaining a very high level of concert performance. Cawston and District Silver Prize Band, to give them their original title, were formed in 1886 in the village of Cawston 11 miles north of Norwich.

During the afternoon the rain stopped and we were able to fully enjoy a wonderful show from the Cawston Band. One of the highlights was a Les Miserables medley which was greatly enjoyed by the audience. At the end of the concert they had us dancing like Cossacks.
Posted by Andy Yourglivch at 14:12