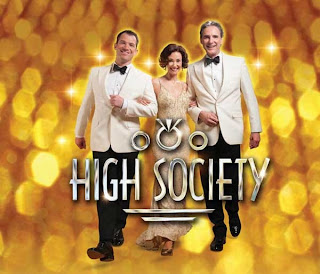 Wealthy socialite Tracy Lord is in the midst of planning a lavish summer wedding when her ex-husband Dexter Haven turns up to disrupt the proceedings in an attempt to try and win her back. A further twist arrives in the form of charming reporter Mike Connor who falls instantly for Tracy, and she for him. As the day of the wedding draws closer we’re left guessing which groom the bride will choose.

There were amazing performances from Michael Praed as Dexter Haven and Sophie Bould as Tracy Lord on a night that brought us a number of beautiful ballads including True Love, You're Sensational and Well, Did You Evah! This was a glorious night at Norwich Theatre Royal as we were treated to a night of sparkling glamour.
Posted by Andy Yourglivch at 14:29