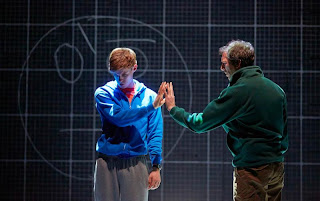 Adapted from Mark Haddon’s 2003 best-selling book, playwright Simon Stephens transfers all the mystery of the novel to the stage. The play follows a 15 year-old maths genius who tries to unravel the mystery of his neighbour’s murdered dog, that was found speared by a garden fork. Against his father’s orders, and in spite of his own personal limitations, Christopher sets out on a quest to discover the real truth behind the murder. Unfortunately the teen unearths more than he bargained for and eventually the secrets of his own life unravel before his very eyes. The Curious Incident of the Dog in the Night-Time is both a murder mystery and a tale of personal discovery for somebody on the edges of society.

The stage was full of squares and numbers which to me represented the complex and logical nature of Christopher's brain. He is a mathematical genius who always tells the truth whatever the circumstances. From his investigations concerning the murdered dog he learns a lot about how adults tell lies and some shocking truths about his family. He finds out his Mother is still alive and makes a epic journey from Swindon to London with his pet rat, Toby.

I really enjoyed the fast and furious nature of the action on stage which included flash backs and how we as the audience were able to get to understand Christopher's behaviour. Everyday things appeared to be difficult for him but A Level Maths with it's logical solutions were suited to his way of thinking. This was a wonderful and very enjoyable afternoon at the Apollo Theatre which showed how the theatre can portray different ideas and visualise them. The stage design seemed very 21st Century and made for the perfect setting for The Curious Incident of the Dog in the Night-Time and Christopher's adventure.
Posted by Andy Yourglivch at 00:51