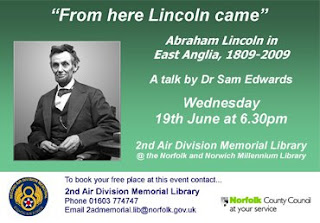 On Wednesday 19th June 2013 I attended the From Here Lincoln Came: Abraham Lincoln in East Anglia, 1809-2009 talk by Dr Sam Edwards at the Norfolk and Norwich Millennium Library. This was the second of three talks celebrating the 50th anniversary of the opening of The 2nd Air Division Memorial Library.

Dr Sam Edwards told us of attempts to link Abraham Lincoln to his English roots as part of transatlantic politics. There is bust of Abraham Lincoln in St. Andrew's Parish Church of Hingham in Norfolk. This was a very interesting talk at the Norfolk and Norwich Millennium Library which highlighted the Great Emancipator's East Anglian ancestry.
Posted by Andy Yourglivch at 04:45