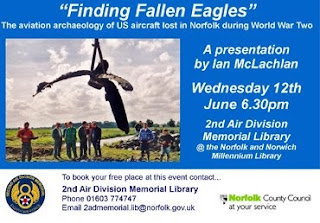 On Wednesday 12th June 2013 I attended the Finding Fallen Eagles talk by Ian McLachlan at the Norfolk and Norwich Millennium Library. This was the first of three talks celebrating the 50th anniversary of the opening of The 2nd Air Division Memorial Library.

The Finding Fallen Eagles talk was about the aviation archaeology of US aircraft lost in Norfolk during World War Two. Ian McLachlan is a renowned aviation historian and author who gave us an account of the excavation of the sites as well as details behind the causes of the crashes. He took us through the process of documenting a site, from the initial research to placing the artifacts in museums. He told us about the trials of gaining permission from land owners and the Ministry of Defence as well as dealing with difficult excavation environments.

From these aircraft excavations Ian McLachlan has been able to give us a detailed account of these incidents as well as the people involved therefore we were able to learn about those involved and aspects about their lives. We also heard about his experiences when one of his excavations was featured on Time Team on Channel 4. In February 1944 two American 'Flying Fortresses' crashed into each other only a few miles from their home base, on their way back from a bombing raid over Germany. One of the aircraft tumbled into a marsh at Reedham, Norfolk killing all ten of the crew and gradually became buried in the peat.

This was a very interesting talk by Ian McLachlan at the Norfolk and Norwich Library which was fully booked as the 2nd Air Division Memorial Library celebrated 50 years in the fine city of Norwich. This Autumn Ian McLachlan will be presenting an exciting eight week course called The Friendly Invasion: The US Army Air Force in East Anglia at the 2nd Air Division Memorial Library.
Posted by Andy Yourglivch at 12:57