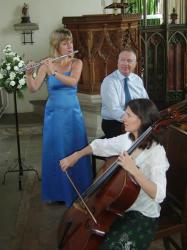 Anna Hopkins studied for four years at the Royal College of Music. She is a private and peripatetic flute teacher and is also an examiner for London's Trinity College. Maja Passchier studied cello at the Utrecht Conservatoire. She now lives in Norwich and teaches cello in schools and privately. David Morgan was a lecturer of music at Norwich City College and he was Organist at St. Edmunds, Acle.

This was a wonderful recital at St. Peter Mancroft Church which proved to be a fantastic finish to this Summer's Recital Series. This has been another successful series for Mancroft Music as yet again they have provided the people of Norwich with lots of splendid music.
Posted by Andy Yourglivch at 14:38