The Perfect American at The London Coliseum 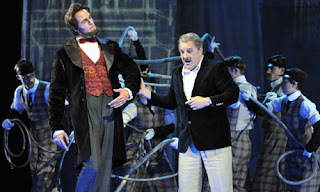 Based on Peter Stephan Jungk’s novel and written by Philip Glass, one of the world’s most important composers, The Perfect American imagines the final months of Walt Disney’s life, including mythical imaginings of Abraham Lincoln and Andy Warhol. This latest opera from Glass, his 24th, was commissioned by ENO and Teatro Real Madrid to mark his 75th birthday.

The sounds of Minimalism and the world of Walt Disney made for a surreal night at the London Coliseum as we discovered Disney’s delusions of immortality and got a glimpse into his private life. There were fantastic performances from Christopher Purves as Walt Disney and Janis Kelly in the role of Disney’s studio nurse and confidante.

This was a very enjoyable night at the London Coliseum as Philip Glass's The Perfect American made for a fascinating and entertaining Opera which included a brilliant score. The Opera ends with Dantine, an animator who worked on the classic Disney films, meeting the undertaker at the funeral home. He is told that Walt Disney has not been frozen but rather his body has been cremated. In the distance the chorus echoes Disney’s dreams of a magical world of everlasting happiness.
Posted by Andy Yourglivch at 14:26