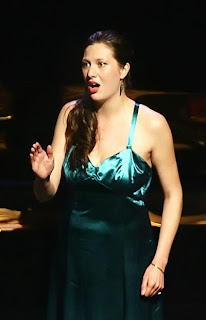 On Saturday 22nd June 2013 I attended the Eve Daniell and Tom Primrose Summer Recital at St. Peter Mancroft Church, Norwich. I just made the start of the Recital after watching The Lions beat Australia with a two minute dash from Timberhill.

British/Canadian soprano Eve Daniell is attending the Royal Academy of Music in London. She attended the University of Victoria and holds performing diplomas in voice and piano from the Royal Conservatory of Music. She has performed as Witch and Mother in Humperdinck's Hansel and Gretel and Sorceress in Purcell's Dido and Aeneas.

This was a wonderful Recital at St. Peter Mancroft Church with both Eve Daniell and Tom Primrose giving splendid performances. Thanks to both of them for standing in at short notice for this Mancroft Music Summer Recital. It was fantastic to hear Benjamin Britten's On this island in his Centenary Year.
Posted by Andy Yourglivch at 05:11