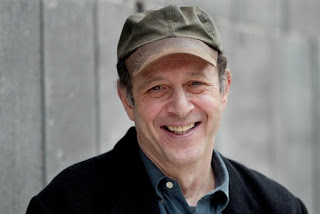 On Saturday 15th October 2011 I attended the London Symphony Orchestra's Steve Reich 75th Birthday concert at The Barbican with Kristjan Jarvi as conductor and the Synergy Vocals providing the voices on The Desert Music. Steve Reich took part in the concert on Clapping Music.

The programme for Steve Reich at 75 was Clapping Music, The Four Sections, Three Movements and The Desert Music. A night to celebrate the life of one of our lifetimes greatest composers. Musical Minimalism in all it's glory with loads of clapping.

Steve Reich in his trademark baseball cap was joined by London Symphony Orchestra's percussionist Neil Percy for Clapping Music which reflects the composer's desire to create a piece of music that needed no instruments beyond the human body. How wonderful it was to see Steve Reich in person who was clearly enjoying the evening.

The London Symphony Orchestra treated us to splendid performances of The Four Sections and Three Movements before the interval which showed off Steve Reich's music to full effect. These pieces from the Eighties were commissioned by the San Francisco and St. Louis Symphonies.

The Desert Music complete with the voices of the Synergy Voices filled The Barbican Hall with a glorious sound. The music is a setting of poems by William Carlos Williams. A brilliant end to the concert that gave us another opportunity to applaud Steve Reich along with everyone else who helped make this such a special evening.
Posted by Andy Yourglivch at 13:01