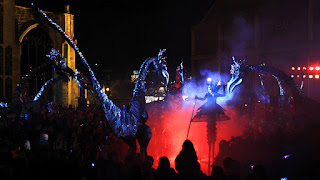 Once the Briten Sinfonia concert finished at St. Andrew's Hall on Friday 11th May 2012 I made my way to Gentleman's Walk for the Close-Act UK premiere of Invasion as the Norfolk and Norwich Festival brought a mythical world full of huge beasts stalking majestically through the streets of Norwich with prehistoric birds flying overhead.

The performance moved around Norwich Marketplace past City Hall before culminating in a performance at The Forum. I walked around with the puppeteers until they reached The Forum where a large crowd had gathered. In this brilliant piece of street theatre the audience become part of the performance as we were entertained by a mixture of birds, dinosaurs, drummers, one eyed robots and a witch on stilts.

It was like chaos in Norwich City Centre until a magical song attracts the prehistoric animals and restores calm, leaving the crowds to go with the flow of this unique and amazing event which brought the Norfolk and Norwich Festival to several thousand people. I really enjoyed this event from dutch street theatre company Close-Act and I loved the way how along with everyone else on this memorable night became part of the mystical world they created.
Posted by Andy Yourglivch at 14:02