Present Laughter at The Maddermarket Theatre 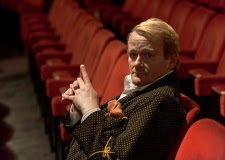 On the afternoon of Saturday 28th April 2012 I attended the Norwich Players matinee performance of Noel Coward's Present Laughter at the Maddermarket Theatre, Norwich. This was the debut production for new artistic director Genevieve Raghu.

The plot follows a few days in the life of the successful and self-obsessed light comedy actor Garry Essendine as he prepares to travel for a touring commitment in Africa. Amid a series of events bordering on farce, Garry has to deal with women who want to seduce him, placate both his long-suffering secretary and his estranged wife, cope with a crazed young playwright, and overcome his impending mid-life crisis. The story was described by Coward as "a series of semi-autobiographical pyrotechnics."

This was a splendid performance from the Norwich Players with Christian de l'Argy playing the part of Garry Essendine. The stylish clothing of the period were spot on as we were taken to the world of London in the Spring of 1939 which brought us many funny moments that brought smiles and laughter to the Maddermarket Theatre. I'm so sorry it's a wrong number as Garry would tell Liz. Young ladies forgetting their latch keys and spending the night in the spare room was a regular happening at Garry's flat in Sloane Square.

Garry said in Act One, "You're not in love with me, the real me. You're in love with an illusion." This sums up the play as Garry tries to deal with his situation and passing years. I really enjoyed my afternoon at the Maddermarket Theatre as the Norwich Players put on the style with a performance full of emotions and asking what is love? The title of the play being taken from Feste's song in William Shakespeare's Twelfth Night.
Posted by Andy Yourglivch at 14:09