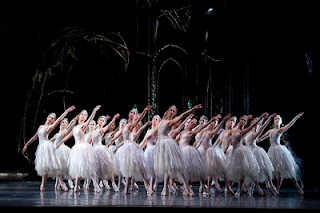 On Saturday 13th October 2012 I caught the early train from Norwich to London looking forward to a splendid day which included attending The Royal Ballet's matinee performance of Swan Lake at The Royal Opera House.

Swan Lake was Pyotr Il’yich Tchaikovsky's first score for ballet which was premiered in 1877. Anthony Dowell's romantic interpretation returns the ballet to its 1895 origins by using the choreography of Lev Ivanov and Marius Petipa.

In the castle grounds Benno von Somerstein and other friends of Prince Siegfried are waiting for his arrival to celebrate his coming of age. A feast begins when the Prince and his tutor Wolfgang appear. The Queen reminds the Prince that tomorrow he must formally choose his bride at the ball. When the party finishes the Prince tells Benno and Wolfgang that he wants to remain for a little longer on his own.

Prince Siegfried is magically drawn to the banks of the lake where a flock of white swans are swimming. One of the Swans tells the Prince that she is Princess Odette and that she and her companions have been bewitched by the Evil Genius who in the form of a huge black bird is constantly guarding them. By day the girls are fated to take the form of swans and only at night are they restored to their human form. The spell will be broken when a man falls in love with the Princess.

They dance for the Prince who is captivated by Odette and swears to save her from the magic of the Evil Genius. Odette warns him that the Evil Genius can only be overthrown when a man is prepared to sacrifice his life for love. The Prince invites Odette to the ball.

The Master of Ceremonies gives his final orders as people arrive for the ball. The Queen and Prince Siegfried greet their guests and the brides appear and dance for the Prince. He finds them all charming and beautiful but none to whom he can swear eternal love.

Fanfares announce the arrival of Von Rothbart and his daughter Odile who resembles Odette. The Prince becomes captivated by her. Odette tries to remind him of the Evil Genius and his dangerous magic but the Prince does not see her.

Convinced that Odile and Odette are the same girl Prince Siegfried chooses Odile as his bride. He suddenly sees Odette and realises that he has been deceived. Von Rothbart and Odile disappear leaving Odette destined to remain forever in the powers of the Evil Genius.

The Prince begs Odette to forgive him for his unwitting betrayal swearing his love. He is ready to sacrifice his life to defeat the Evil Genius and rushes into the waves carrying the tyrant bird with him. Both die in the cold waters of the mysterious lake leaving Odette grieving for her beloved Prince.

Brilliant performances from Marianela Nunez as Odette/Odile and Thiago Soares as Prince Siegfried made for a wonderful time in Covent Garden at The Royal Opera House as The Royal Ballet performed the magic of Swan Lake. Fantastic costumes showed the contrast between human and spirit worlds, while glowing lanterns and shimmering fabrics designed by the work of Carl Fabergé created a magical setting. The Orchestra of The Royal Opera House conducted by Boris Gruzin combined with the outstanding dancing from The Royal Ballet made this the perfect afternoon in London.
Posted by Andy Yourglivch at 12:53