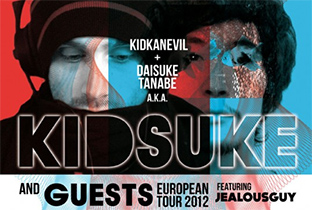 Kidsuke brought us a night of electro treats along with Jealousguy, Maersk and The Boy With Two Heads on Saturday 17th November 2012 at Norwich Arts Centre. This was another Spectro event to get us moving on the dance floor.

Kidsuke is a collaborative project between the UK’s Kidkanevil and Japan’s Daisuke Tanabe. DJ/Producer Kidkanevil first came to prominence with the release of his critically acclaimed debut album ‘Problems and Solutions’ back in 2007, and has since gone from strength to strength.

Described by Bonobo as “like the best moments of RJD2 and Timbaland combined…incredible!” and “a sonic visionary” by iDJ, the kid has earned the praise and respect of numerous peers and journalists, counting the likes of DJ Shadow and Wire Magazine amongst his fans, and progressives Tokimonsta, Blue Daisy and Illum Sphere amongst his contemporaries.

Now three albums deep his latest offering ‘Basho Basho’ “deserves to put Kidkanevil right up there with Flying Lotus” (Knowledge Magazine) and sees him riding into town like a hi-tec hunter-gatherer, spearing, chopping and mixing beats in his own unique style.

This was a fun night at Norwich Arts Centre with Kidsuke bringing us DJ Shadow influenced beats. There was a brilliant atmosphere created at the venue as Kidsuke took us on an amazing electronica journey. This was progressive music at it's best. Well done Spectro on another successful event.
Posted by Andy Yourglivch at 04:31