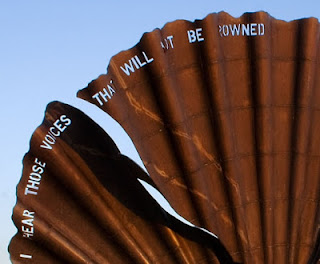 On Friday 23rd November 2012 I attended the UEA Symphony Orchestra's Britten Centenary Celebration Concert at St. Andrew's Hall, Norwich with two unfinished masterpieces being performed. The orchestra were conducted by Sharon Andrea Choa. Soloists were Simon Smith - violin and Paul Silverthorne - viola. The programme consisted of Double Concerto for Violin, Viola and Orchestra in B minor - Britten and Symphony No.3 - Elgar/Payne.

Britten wrote the Double Concerto at the age of 18 but never realised the orchestral parts, nor sought to have it performed. The work only received its premiere in 1997, after completion by Colin Matthews. Anthony Payne (UEA’s Composer in Residence) had a great deal less material to work with – no score, but 130 pages of sketches – when he set out to complete Elgar’s unfinished 3rd Symphony, which also received its first performance in 1997, to great acclaim, at the BBC Proms.

This was a wonderful evening at St. Andrew's Hall to celebrate the centenary of Benjamin Britten which included a brilliant performance of his Double Concerto for Violin, Viola and Orchestra. Anthony Payne was in attendance with Elgar's Symphony No.3 being performed. This piece finishes on a fade out ending, with a ghostly echo of the symphony's opening in the very last bars. Payne took this cue from The Waggons Passes, from Elgar's 1930 Nursery Suite.
Posted by Andy Yourglivch at 02:07