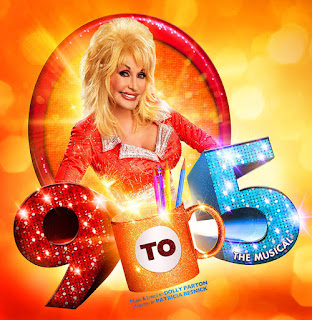 On the evening of Thursday 28th February 2013 I attended 9 to 5 The Musical at Norwich Theatre Royal. This is the hilarious new musical comedy based on the hit movie, that centres on three office workers who turn the tables on their sexist boss, and features original numbers from Dolly Parton’s Oscar, Tony® and Grammy Award nominated score including Backwoods Barbie, Shine Like the Sun and, of course, the hit song 9 to 5.

This was a fun night at Norwich Theatre Royal as we were taken back to 1979 when attitudes and office work were different from the present day. This was the days before the internet and an office where the old boy's network came to the fore. On stage Mark Moraghan, Jackie Clune, Natalie Casey, Amy Lennox and Bonnie Langford performed brilliantly and we also had Dolly Parton on a video screen reminding us that working 9 to 5 was all taking and no giving. They just use your mind and they never give you credit. Its enough to drive you crazy if you let it.

9 to 5 what a way to make a living. 9 to 5 what a way to spend an evening at Norwich Theatre Royal. It was a night bringing back memories of the 1980 film version of 9 to 5 starring Dolly Parton, Jane Fonda and Lily Tomlin. 9 to 5, for service and devotion. You would think that I would deserve a fair promotion.
Posted by Andy Yourglivch at 01:53