Rhinoceros at the UEA Drama Studio 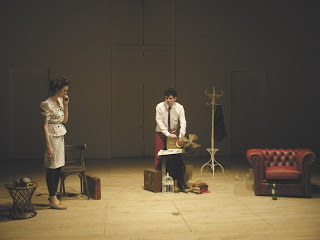 On the evening of Friday 1st March 2013 I attended the Minotaur Theatre Company's performance of Eugene Ionesco's Rhinoceros translated by Martin Crimp at the UEA Drama Studio in Norwich. This translation of Rhinoceros was first produced by the English Stage Company at the Royal Court Theatre in 2007.

The play belongs to the school of drama known as the Theatre of the Absurd. Over the course of three acts, the inhabitants of a small, provincial French town turn into rhinoceroses; ultimately the only human who does not succumb to this mass metamorphosis is the central character, Bérenger, a flustered everyman figure who is often criticised throughout the play for his drinking and tardiness.

The play questions issues of morality, philosophy, love and what it means to be a human being. This was a though provoking play which I very much enjoyed. Rhinoceros is comical in parts and there were lots of moments to make you laugh. Listen out for the sound of Ahhh Ahhh Brrrrr! I'm a Rhinoceros!
Posted by Andy Yourglivch at 11:24