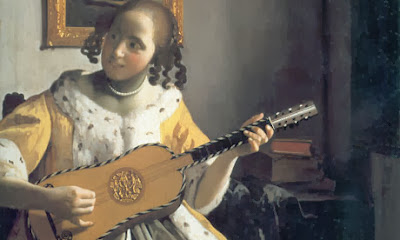 For the first time the National Gallery’s two paintings by Vermeer, A Young Woman standing at a Virginal and A Young Woman seated at a Virginal were brought together with Vermeer’s Guitar Player. There were technical explanations of the paintings along with a recital from the Academy of Ancient Music. It was fantastic to hear the music from the period being played live being surrounded by these amazing paintings. In the 17th-century music was in the moment but with paintings like the Guitar Player the music can live forever.
Posted by Andy Yourglivch at 04:18