A Midsummer Night's Dream at The Whiffler Theatre 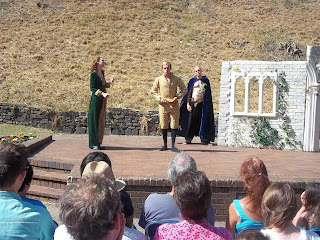 On the afternoon of Sunday 7th July 2013 I attended the Chapterhouse Theatre Company's performance of William Shakespeare's A Midsummer Night's Dream at the Whiffler Theatre at Norwich Castle Gardens. This event was part of the Lord Mayor's Celebration which was taking place in Norwich throughout the weekend.

Chapterhouse Theatre Company is a professional touring theatre company, bringing its wide range of experience to venues across Britain. The company prides itself on fully accessible, traditional, but innovative productions. They are in their twelfth season of productions, with a selection of ever-popular Shakespearean plays, adaptations of fine, classic English novels and their beloved children's show, featuring Milky-White the cow touring country houses and gardens throughout the UK and Ireland.

A Midsummer Night’s Dream, William Shakespeare's most popular comedy, was written around 1595. It portrays the adventures of four young lovers and a group of amateur actors, their interactions with woodland fairies and a duke and duchess. Taking place in a mythical Athens and an enchanted forest, there is a handsome fairy king, a misguided parent, star-crossed lovers, a weaver who's transformed into a half-donkey, wood sprites and elves. This work is widely performed around the world, and no wonder - it's about the world's most popular pastime, falling in love. But as Puck knows, falling in love can make fools of us all.

There was a large audience on a sunny afternoon in Norwich Castle Gardens to see the Chapterhouse Theatre Company perform a wonderful and fun A Midsummer Night's Dream. This was a free event as part of the Lord Mayor's Celebration and proved to be a very enjoyable comedy, with the Chapterhouse Theatre Company putting on a brilliant performance at the Whiffler Theatre.
Posted by Andy Yourglivch at 11:14