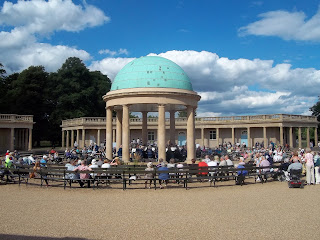 On the afternoon of Sunday 11th August 2013 I attended the Taverham Band Bandstand Concert at Eaton Park, Norwich. This was the latest Bandstand Concert in the series organised by Norwich City Council and Brian Dermott on every Sunday from June to August in various Norwich parks.

The Taverham Band was formed in November 1974 by a small group of villagers who were keen to start a brass band. With donations of monies and loans by founder members, the Band was able to purchase a set of instruments, from the folded Stibbard Band, to start its playing history.

This was a fun and entertaining afternoon on Eaton Park as the Taverham Band gave us a wonderful performance of fantastic music. Some of the highlights were Procol Harum's Whiter Shade of Pale, Max Bygraves's Tulips from Amsterdam, The Monkees Daydream Believer and Baggy Trousers by Madness. The conductor had the audience dancing along to Is This the Way to Amarillo while doing a couple of circuits of the bandstand.
Posted by Andy Yourglivch at 15:05