Viva Verdi at the BBC Proms 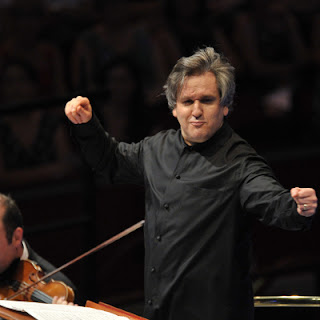 On the evening of Saturday 20th July 2013 I attended the BBC Proms at the Royal Albert Hall in London. Prom 12 featured the Orchestra and Chorus of the Academy of Santa Cecilia, Rome conducted by Sir Antonio Pappano and soprano Maria Agresta. Viva Verdi! was an all Verdi programme in his bicentenary year.

Verdi's String Quartet was written in the spring of 1873 during a production of Aida in Naples. It is the only surviving chamber music work in Verdi's catalogue. The Orchestra performed the Carl Hermann arrangement for a string orchestra.

Ave Maria was composed by Verdi in 1880 for a benefit concert at La Scala, Milan. The Ave Maria for soprano and strings uses the Italian text attributed to Dante, rather than the Latin words of the Catholic liturgy. When Rossini died in 1868, Verdi suggested that a number of Italian composers should collaborate on a Requiem in Rossini's honour, and began the effort by submitting the conclusion, Libera me. The complete Messa per Rossini remained unheard until its performance and recording in Stuttgart in 1988.

It was fantastic to be back at the BBC Proms at the Royal Albert Hall. The Orchestra of the Academy of Santa Cecilia and Sir Antonio Pappano performed a wonderful bicentenary celebration of Verdi with whose music they are particularly closely associated. Maria Agresta sang beautiful versions of The Ave Maria and Libera Me. The highlight of the evening was the performance of the Four Sacred Pieces which was full of dramatic music.
Posted by Andy Yourglivch at 02:11