BBC National Orchestra of Wales at the BBC Proms 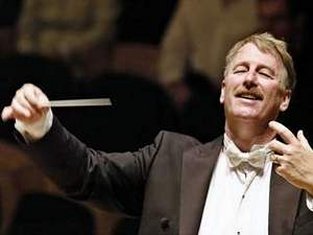 On the evening of Wednesday 24th July 2013 I attended Prom 16 of the BBC Proms at the Royal Albert Hall in London. This performance from the BBC National Orchestra of Wales conducted by Jac van Steen with cellist Raphael Wallfisch was a programme of music from three British composers and the first in this season's Tchaikovsky symphony cycle.

Elgar's Falstaff was premiered in 1913 which the composer called a symphonic study because it was a portrait not just of Falstaff, but of Shakespeare and all human life. Falstaff is a character from Henry IV Parts 1 and 2 who was a thoroughly bad, if sometimes lovable influence on the future Henry V, who disowns his ancient friend when he succeeds to the throne.

The Sapphic Poem was composed by Bantock in 1906. The version for cello and orchestra was published in 1909. It is closely associated with Bantock's Sappho, a vocal cycle setting fragments from the 7th century BC poetess of Lesbos, in translations by Bantock's wife Helena. This was the Proms premiere of the Sapphic Poem.

Touch her soft lips and part and The Death of Falstaff are from the 1944 film Henry V, for which William Walton composed the music in close collaboration with the film's director and star Laurence Olivier. Touch her soft lips and part is a romantic piece where Pistol bids farewell to his new wife before setting off for France. The Death of Falstaff is a series of variations founded on the Elizabethan drinking song Watkyn's Ale from the Fitzwilliam Virginal Book.

Tchaikovsky's Symphony No. 4 was written between 1877 and 1878 and was considered by the composer as a reflection of his emotional strife. Tchaikovsky referred to the symphony's opening fanfare as fate, the force of destiny. During the composition of the Fourth Symphony Tchaikovsky started to benefit from the regular allowance sent to him by the wealthy, eccentric widow Nadezhda von Meck. The Fourth Symphony is dedicated to her.

The BBC National Orchestra of Wales conducted by Jac van Steen performed a wonderful programme of music with the highlight being Tchaikovsky's Symphony No. 4.  Raphael Wallfisch who celebrates his 60th birthday this year gave an intimate performance of Bantock's Sapphic Poem. There was also an encore of Bantock's Hamabdil. This was a fantastic Prom at the Royal Albert Hall which I greatly enjoyed.
Posted by Andy Yourglivch at 03:31