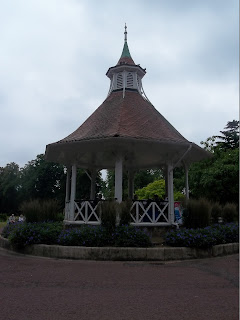 On Sunday 14th July 2013 I attended the Norwich Accordion Band Bandstand Concert on Norwich Chapelfield Gardens which was part of the series of concerts that were organised by Norwich City Council and Brian Dermott in various Norwich parks on every Sunday from June to August.

The Norwich Accordion Club consists of about 30 members playing in two groups 'The Band' and 'The Troshers'. They all enjoy playing the instrument, entertaining and taking part in festivals. The Club was started in 1970 and celebrated its 40th Anniversary in 2010.

From the theme to Titanic to Mit Harmonika Gruss, the Norwich Accordion Band were given a warm welcome in Chapelfield Gardens and played a wonderful programme of music. This proved to be a enjoyable and relaxing afternoon at the latest Bandstand Concert.
Posted by Andy Yourglivch at 15:28