Tosca at the Royal Opera House 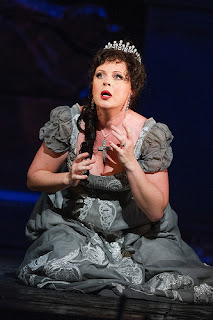 Tosca is an opera in three acts by Giacomo Puccini to an Italian libretto by Luigi Illica and Giuseppe Giacosa. It premiered at the Teatro Costanzi in Rome on 14 January 1900. The work, based on Victorien Sardou's 1887 French-language dramatic play, La Tosca, is a melodramatic piece set in Rome in June 1800, with the Kingdom of Naples's control of Rome threatened by Napoleon's invasion of Italy. It contains depictions of torture, murder and suicide, yet also includes some of Puccini's best-known lyrical arias, and has inspired memorable performances from many of opera's leading singers.

Tosca tells the story of the love between the famous opera singer Floria Tosca and the painter and political activist Mario Cavaradossi. Cavaradossi sends the political escapee and former Roman Consul-General, Cesare Angelotti, to hide down the well in his garden. The evil Baron Scarpia is determined to have Tosca for himself, and invites her to supper in order to discover the whereabouts of Angelotti. He orders the torture of Cavaradossi in her earshot. Unable to bear his screams of pain, Tosca willingly gives up the information – but not before she has persuaded Scarpia to allow her and her lover to escape from Rome.

He insists that to satisfy the authorities, Cavaradossi must undergo a mock execution, and arranges this with one of his henchmen, Spoletta. He then provides Tosca with a note of safe-conduct for her and her lover. As Scarpia attempts to ravish Tosca, she stabs him. Before his body is discovered, she rushes to the prison in the Castel Sant'Angelo to tell Cavaradossi that he has to face the firing squad, that the muskets will contain blanks, and he will have to act his death. But Scarpia has tricked Tosca - the bullets are real. As Cavaradossi lies dead and Scarpia's henchmen approach, Tosca is left with no alternative and takes her own life.

There were brilliant performances from Martina Serafin as Floria Tosca, Aleksandrs Antonenko as Mario Cavaradossi and Scott Hendricks as Baron Scarpia as well as amazing music from The Orchestra of The Royal Opera House conducted by Daniel Oren. This was an emotional afternoon at the Royal Opera House which was greatly enjoyed by an enthusiastic audience. Tosca is one of the great Operas and the Royal Opera House is the perfect venue to experience Puccini's masterpiece.
Posted by Andy Yourglivch at 02:33