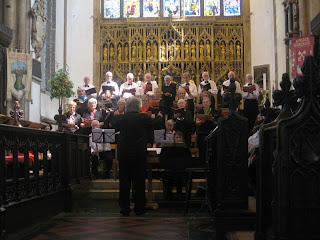 The highlight of the concert was Samuel Coleridge Taylor's Hiawatha's Wedding Feast. Based on a poem by Henry Wadsworth Longfellow, The Song of Hiawatha is a trilogy of cantatas composed between 1898 and 1900. The first part, Hiawatha's Wedding Feast, was an immediate sensation, making the composer's name throughout the world. The chorus describes in great detail the wedding guests, their dress and food. Hiawatha was a Native American who was Chief of the Iroquois in the Sixteenth Century.

This was a wonderful concert at St. Peter Mancroft Church which was greatly enjoyed by the audience in attendance. The performance began with us joining in with the singing of For the Beauty of the Earth and included a fantastic playing of Jay Ungar's Ashokan Farewell by Meryl Dempsey.
Posted by Andy Yourglivch at 15:06